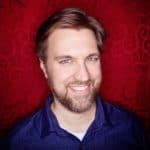 Lars Kelto is the Technology Director, Shorts Programmer and Animator for Michael Moore’s Traverse City Film Festival, on the pinky of Michigan’s mitten. While his educational background is in computer science, Lars has never taken a break from filmmaking, which led to joining the festival in 2006. His work can be seen every year in TCFF animations, promotional videos and short films. He also oversees technology for the festival’s two, year-round theaters. What time remains in his day is filled with software development, acting, hosting bar trivia, and two goofy daughters.