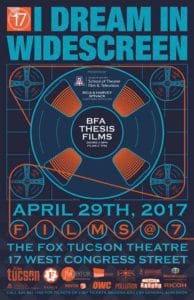 Tucson, Arizona – “I’m learning to make movies for you, Grandma,” said senior filmmaker, Stacy Howard, whose Navajo grandmother asked her why she was going to school for filmmaking. Howard is originally from Mexican Water, Arizona, an unincorporated community in the Navajo Nation in Apache County, and her thesis film at I Dream in Widescreen is called, Amásání (The Grandma). Howard’s short film is just one of many unique stories by emerging University of Arizona filmmakers in 2017.

I Dream in Widescreen is an annual screening event where people have the chance to see original films from the UA Film & Television program before they travel the world to major international film festivals, such as Sundance and the Berlin International Film Festival (Berlinale).

“The growing quality of this work by our students is bringing increasing distinction to not only the filmmakers, but also to the faculty, the School of Theatre Film & Television, and the University of Arizona,” said UA School of Theatre, Film & Television Director, Bruce Brockman. “National and international film festivals and industry partners are continuing to take note of this amazing film work.”

The Film & Television program is welcoming some new sponsors and some returning sponsors from the film industry, including Fancy Film Post; Entertainment Partners, the creator of Movie Magic Budgeting and Scheduling; Film Tucson; Neil Benton Arts & Entertainment, Pollution Studios; Other World Computing; as well as the UA Hanson Film Institute. Some of the sponsors are offering generous and meaningful awards to celebrate the film students’ accomplishments and help them continue to make films.

The graduating BFA filmmakers will compete for the Fancy New Filmmaker Award and the Other World Computing Award for Excellence in Editing, in addition to other awards that offer a cash value.

From a timely and moving story about an undocumented immigrant mother by Tanya Núñez, called Dios Nunca Muere (God Never Dies), to a mystery-comedy about cheating students and a teacher who is determined to find their method in Pizza, by Evan Colten, this year’s thesis films are both imaginative and diverse.

“I know my classmates and I are really looking forward to sharing I Dream in Widescreen with anyone who loves movies,” said graduating senior filmmaker, Margaret (Maggie) Adams.