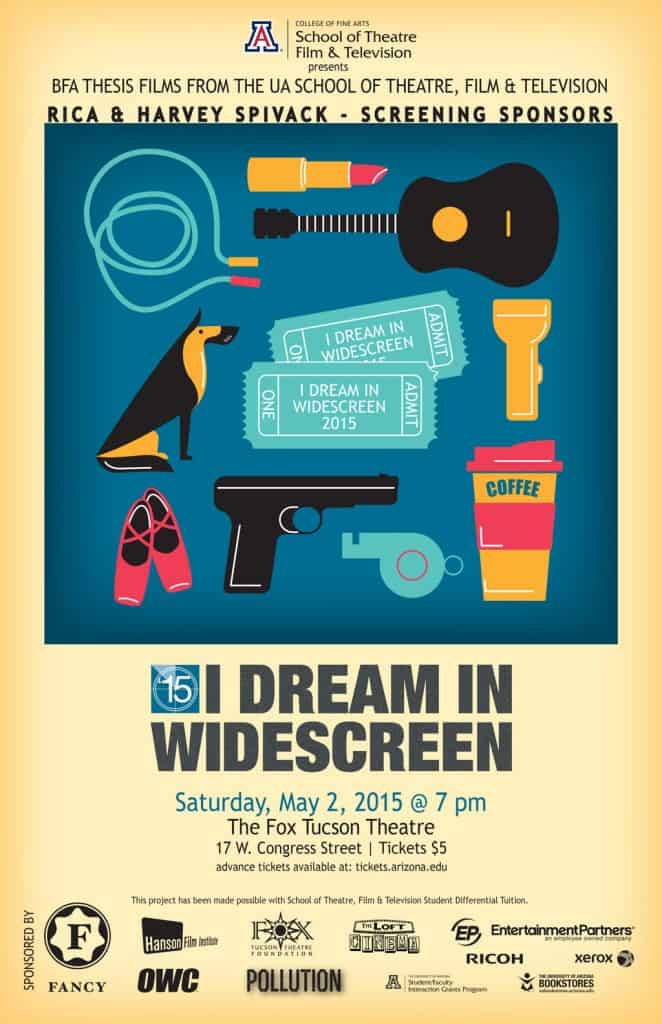 Tucson, Arizona – I Dream in Widescreen: BFA Thesis Films from The University of Arizona School of Theatre, Film & Television, will return this year to the Fox Tucson Theatre on Saturday, May 2, at 7:00pm.

This standing room only, annual event is the first chance to see original films from the UA Film & Television program before they travel the world to major international film festivals, such as Sundance and the Berlin Film Festival (Berlinale), which internationally premiered the 2014 UA thesis film, Bloodlines, by Christopher Cegielski in February, 2015.

“We are delighted by the international recognition the films are receiving and for the growing industry support of this screening,” said Professor Beverly Seckinger. “This year, we are welcoming many great sponsors from the film industry, including Fancy Post, Entertainment Partners, the creator of Movie Magic Budgeting and Scheduling, Pollution Studios, Other World Computing, as well as theUA Hanson Film Institute. These sponsors are offering wonderful and meaningful awards to celebrate our talented students’ accomplishments and help them continue to make films.”

The graduating BFA filmmakers will compete for the Fancy New Filmmaker Award, and the Hanson Film Institute Award for Best Production Design, among many others.

From Wade Shields’ horror-musical mash-up, Slashed!, to Omar Lopez’s Nowhere, inspired by the late Bisbee husband and wife musical duo, Amy and Derrick Ross, a.k.a. Nowhere Man and A Whiskey Girl, this year’s thesis films are as varied as they are original.

“It’s a slice of their life as I imagined it, but a very unfortunate, beautiful slice,” said Lopez, who said he never knew the duo in life, but was moved by their story’s end.

I Dream In Widescreen is made possible with support from the UA School of Theatre, Film & Television’s Student Differential Tuition Funds, the UA Hanson Film Institute, the UA Student Faculty Interaction Program, The Fox Tucson Theatre, and Ricoh.

Please contact Beverly Seckinger at (520) 621-1239 or bsecking@email.arizona.edu to request an advance online screener of films. Films may contain mature themes, adult language and/or graphic images. Seating is limited and $5 tickets are on sale now through the UA Fine Arts Box Office at (520) 621-1162 or at tickets.arizona.edu. All proceeds will help pay for the event itself.