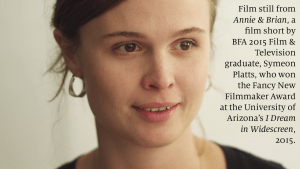 I Dream in Widescreen: BFA Thesis Films from The University of Arizona School of Theatre, Film & TeTUCSON, ARIZONA – I Dream in Widescreen: BFA Thesis Film Shorts from The University of Arizona School of Theatre, Film & Television, is proud to announce its winning graduates in 2015. The Fancy New Filmmaker Award, the grand prize of a festival and exhibition grant from Los Angeles-based postproduction facility, Fancy Film, went to BFA 2015 Film & TV graduate, Symeon Platts, for Annie & Brian, a short film he wrote and directed about two people who aren’t thrilled with their own lives, but yet find solace in each others’. Platts will be able to professionally present his film at the top international film festivals on the festival circuit. With this award, Platts received an HD Cam master, a 2K unencrypted DCP, a professionally created Blu-ray master and five Blu-ray copies, plus a professionally created streaming QT for Vimeo presentation.

The Other World Computing Award for Excellence in Editing, a gift certificate worth $500 in technology purchases, was awarded to Wade Shields for his film editing on SLASHED!, which he also wrote and directed.

Honoring one cinematographer, The Pollution Studios Award for Excellence in Cinematography went to Gilbert Rataezyk for the film short, My Worthless Ambition, about the last man on Earth, directed by Josiah Craig. Rataezyk received a certificate worth $500 toward equipment rental for his next production.

The Entertainment Partners Award for Excellence in Producing went to Serena Sahajian and Robbie Hyne for their role as producers for Saving Mr. Stan’s, directed by Eliza Weiss. Both producers received a copy of EP’s Movie Magic Budgeting and Scheduling software, the industry standard for this software.

The jurors who chose the award-winning works among the 2015 thesis films from The University of Arizona’s graduating Film & Television class were: Claudette Godfrey, the Short Film Programmer for the South by Southwest Film Festival in Austin, Texas; Herb Stratford, Programming Director at the Napa Valley Film Festival and Tucson film critic; and Joseph Garrity, a Los Angeles-based production designer who is also the Senior Filmmaker-in-Residence in Production Design at the American Film Institute Conservatory.